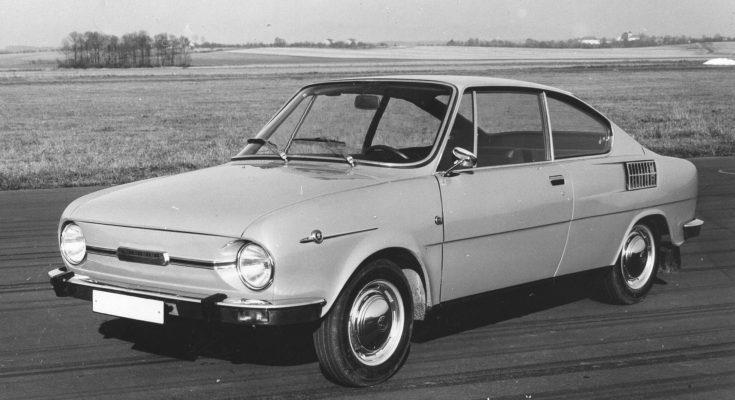 For today, I have chosen a model that reaps success for our domestic brand even today. Basically, this is the first coupe that Skoda has ever produced. Yes, I mean the Skoda 110R , which was produced in the years 1970-1980 at the Kvasiny plant.

The first concept of this model was shown to the world in 1968 , then the prototype went into serial production almost without modifications, only the details differed. The 1971 production model was noted for the decorative moldings on the fenders, which came from the Skoda 1000MB . In the interior, a dashboard appeared with standard indicators (speedometer, tachometer, fuel gauge, thermometer and oil pressure gauge) in imitation of wood, and the seats did not yet include headrests. The front fascia was equipped with two headlights.

The 1972 model year "lost" the decorative moldings from the 1000MB and the fuel tank neck was reconstructed, plus it was covered with a sheet metal lid. However, for this, the front seats have already received backrests, and the rear part of the car has received grills for ventilation, or so-called "ribs". In 1973 , the model came with another modernization. The front mask underwent a dizzying change – it received four headlights . The heating fan received a second speed and the heating motor increased power, so the crew of the car no longer had much difficulty with the outside temperatures.

The model underwent the last changes in 1980 , at the end of production, when the Skoda 110R received an electrically heated rear window and 13-inch wheels instead of 14-inch ones.

The Skoda 110R is powered by a liquid-cooled 1,107 cc four-stroke four-cylinder with an output of 45.6 kW, while the coupe with aerodynamic elements reaches a top speed of up to 140 km/h. The drive unit, which is located behind the rear axle, is equipped with a four-speed manual transmission and it transmits power to the rear axle. The fuel tank with a volume of 32 liters can be found under the front luggage compartment. The combined consumption was around 9 l/100 km .

The body is self-supporting, steel and two-door with a place for a crew of 2+2. The front of the car is almost identical to the 110 sedan . The doors are frameless and the rear folding windows are frameless. We find disc brakes on the front axle, while only drum brakes on the rear. The interior is equipped with two comfortable seats that are easy to move and fold. In the back there are emergency seats for two people.

The 110R model also served as the basis for the racing versions – 110R Rallye, Skoda 180/200 RS and the 130 RS model, which we wrote about in a separate article. The bodywork of the Skoda 130RS was almost identical to the base 110 R, only the racing version was distinguished by extended fenders. Of course, the power of the engine was adjusted, it reached 103 kW in the 130RS. Racing Skoda has had many successes both in rallies and on circuits.

The exact figure for the number of produced pieces is not known, it is estimated that around 57,000 pieces were produced . In 1981, the successor Skoda Garde came to the market. Around 1990, unfortunately, many "Ereks" fell victim to modifiers (tuners, if you will) when they put engines from 120s, Favorits and others into these tubs. I'm not even talking about body-kits, some of them look really tacky.

Related post:  History of the Impreza WRX STI - Part I.

Currently, the Skoda 110R is in high demand and collectors are mainly looking for preserved models in their original condition. Personally, I would like to own this car or at least ride in it, it's my dream.

View all posts by George →