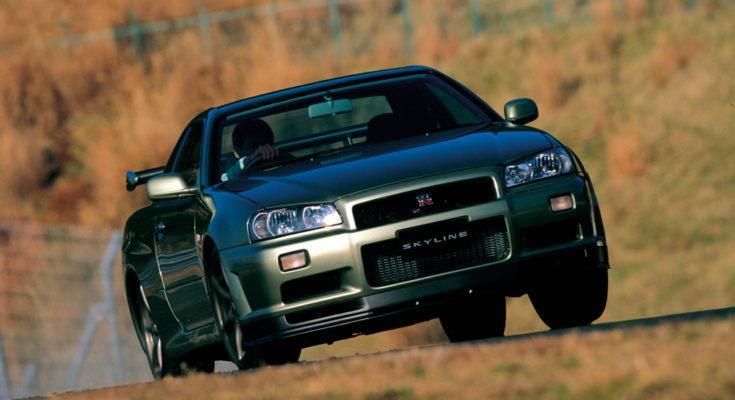 Today we chose probably the TOP. The most you can find in the world of sports cars. An idol, an icon, a legend… This is how one of the best Japanese cars of all time is honored – the Nissan Skyline GT-R R34 Coupé !

When Nissan introduced the fifth generation Skyline in 1999 , everyone got excited. After all, the previous generations were already considered iconic and one of the best in their categories. But it wasn't until the R34 that near perfection was achieved. Like a cut diamond, that's how this car looked.

First, let's talk briefly about the design. There you can tell that the car has gone through an evolution rather than a revolution compared to the R33 generation . Nevertheless, it is shorter, sportier and more dynamic. You can immediately identify the car by the rear wing or the special front bumper. The body was designed according to exact aerodynamic rules . Thanks to this, there are so many wings or maybe two diffusers on the car.

In the interior, the multifunctional LCD display , which displays various statistics and useful data such as oil pressure, will catch your eye at first glance. The orientation of the center panel towards the driver is also interesting. A steering wheel with the GT-R logo or four separate alarm clocks are typical. Of course, there are great anatomical seats and perfect workmanship and materials.

From design to the most important thing – weight. Nissan tried to lighten the R34 . He succeeded, but the car still weighed 1540 kg (safety standards are safety standards). But still, Nissan saved, for example, 7.7 kg on the new wheels. Carbon parts were also used in abundance on the bodywork. The interesting thing is that the speakers also had to submit to the lightening.

Now let's finally look under the hood! The standard version had a twin-turbo six-cylinder 2.6 with a power of 280 hp ! This was a very significant innovation compared to the R33. In addition, the engine had power and torque dosed from low revs – another significant advance. With this engine, the Skyline accelerated to 100 km/h in 5.2 seconds and went up to 250 km/h . But those who had skillful hands and a lot of money could "cool" the car and get up to 3 times more power from it… "Only" 280 horses were transmitted through a 6-speed manual to all four wheels . The 4×4 drive system called Attesa-E-TS was specially developed for road and racing purposes. That's why the car had great traction and acceleration… By the way, the torque value stopped at 392 Nm at 4400 revolutions per minute.

Related post:  Nismo plans to have four models in its portfolio

But it wouldn't be Nissan if it didn't come up with a special version. As early as 1999, Nissan introduced the V-Spec version . It featured new aerodynamic parts, brake system ventilation and a new diffuser. The automaker did not reach under the hood. The V-Spec was replaced in 2000 by the V-Spec II version, which added things like a carbon fiber hood to the above. Added to the V-Spec II version was the V-Spec II Nür version , which added an engine based on the N1 version to the "standard" V-Spec II version. He offered, for example, a modified tube blower , which allowed the tuners to safely get more power from the car. In addition, this version had a calibrated speedometer up to 300 km/h. Officially, this car still had the same 280 horsepower, but unofficially, the V-Spec II Nür was known to have up to 330 horsepower! Furthermore, both V-Spec versions were also in N1 specification, which did not have audio, a rear wiper and was really very light. It was on their basis that the engine for the Nür version was modified… But only about 63 of these were produced. Those who were not so sporty could choose the M-Spec version. It had heated seats, leather interior and softer suspension. The Nür specification was also supplied for this version. It again had a speedometer rated up to 300 km/h and also had a specially adapted engine based on the N1 specification – the same as the V-Spec II Nür…

Even the Skyline was not spared from modifications by NISMO , Nissan's in-house modifier. Thus three versions were created. Nismo S-Tune, Nismo R-Tune and Nismo Z-Tune . The most interesting of this trio is the Z-Tune version. The other versions got, for example, a modified bodykit or new cooling, injection, etc… However, the Z-Tune version went even further! The first car was built on the basis of the V-Spec II version in 2003. It is worth noting that the mentioned V-Spec was used. The car received the Z1 engine, which was based on the circuit racing versions. Of course, it was slightly modified for road traffic. Finally, the 2.8 gave Skylin a respectable performance of 500 horses ! Nismo was going to build 20 units of the Z-Tune version – each based on one used V-Spec version. Each piece was sprayed silver and fitted with a 2.8 500hp engine. Unfortunately, the price was huge – 180,000 dollars in the US (approx. 3.5 million crowns), so Nismo managed to produce only 19 pieces, including two prototypes . This is also why this version is a sought-after item today. And not only for his brutal performances….

It is also interesting that Skyline played in, for example, the movie Fast and Furious and also that you can find it in almost every racing game.

And what to say at the very end? This car was, is and will be a legend . Either for its brutal performances or the playfulness with which it raced along the roads. And I think it's not just my dream to own this piece someday. It will be worth its weight in gold one day!