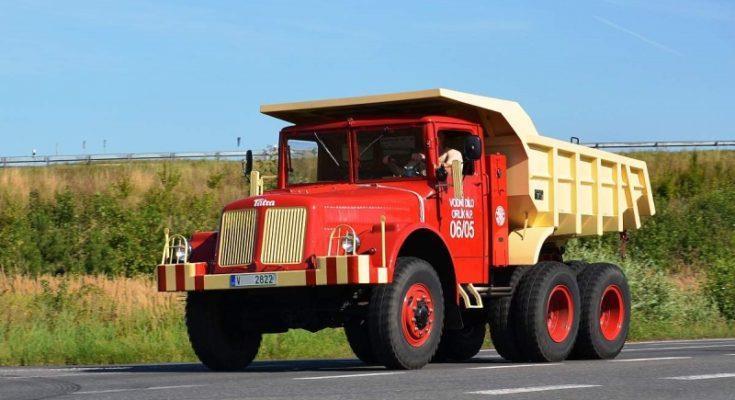 Although quite a few Tatra 147 DC5 dump trucks were produced, not many of them have survived to this day. This is also due to the fact that only recently have lovers of old cars begun to pay attention to trucks as well. Let's hope that the trend is now irreversible and that in a few decades we won't be going to the museum to look at the only preserved Tatra 815 …. Well, definitely not the only one, they have two in the Kopřivnice museum to be sure.

But the Tatra 147 was not very lucky with preserved pieces. A fan of Tatra cars and type 111 in particular, Milan Horka , has one beautiful red specimen in his collection. It took him three years to build his car. Originally, the type 147 was produced as a modification of the more famous Tatra 111 , which is also revealed by the cabin. Also under the hood was the same fifteen-liter forked twelve-cylinder engine with an output of 180 to 210 horsepower. And thanks to the modular chassis , the individual variants were easy to produce (In addition to the three-axle flatbed 111 and dumper 147, the two-axle truck 128 , heavy tractor 141 and trucks 130 and 131 were produced). Mr. Horka's car is also actually built from the 111 type.

Dempr was not created directly in Kopřivnice, but in the company Podpolianské strojarny, np in Detva . The shortened chassis was chosen due to the assumed center of gravity not only in normal condition but also when tipped. Safety was also thought of, so there was a strong steel shield on the cabin. The driver was also constantly informed about the position of the body. By the way, it could hold more than five cubic meters of anything that didn't weigh more than nine and a quarter tons. So they served out their cars in quarries and on construction sites. Period photographs mainly show cars during the construction of the Orlická or Lipno dams. The typical coloring was beige in combination with red or blue. In addition to our homeland, the dump truck was also successfully exported to Romania , the Soviet Union and China . And although quite a few specimens were produced, after all it was a working tool, very few of them have survived to this day.