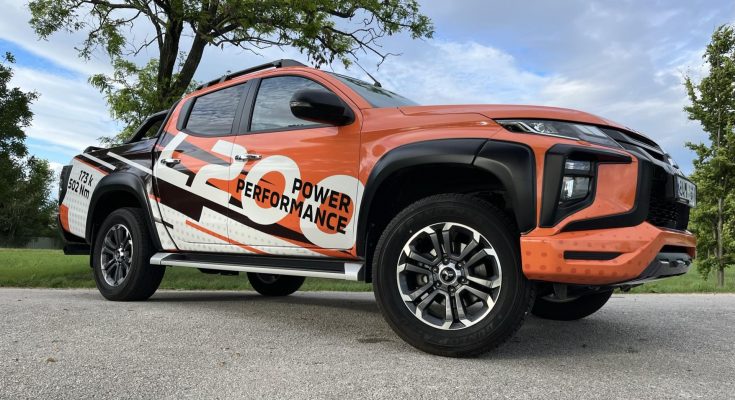 Not so long ago, the workman with three diamonds in the badge could be criticized for not exactly a modern design and only a five-speed automatic, although these details are not so important for a car of this class. The facelift it underwent at the end of 2018 corrected both of these shortcomings and I say without hesitation that it made the L200 subjectively the most beautiful among its competitors. 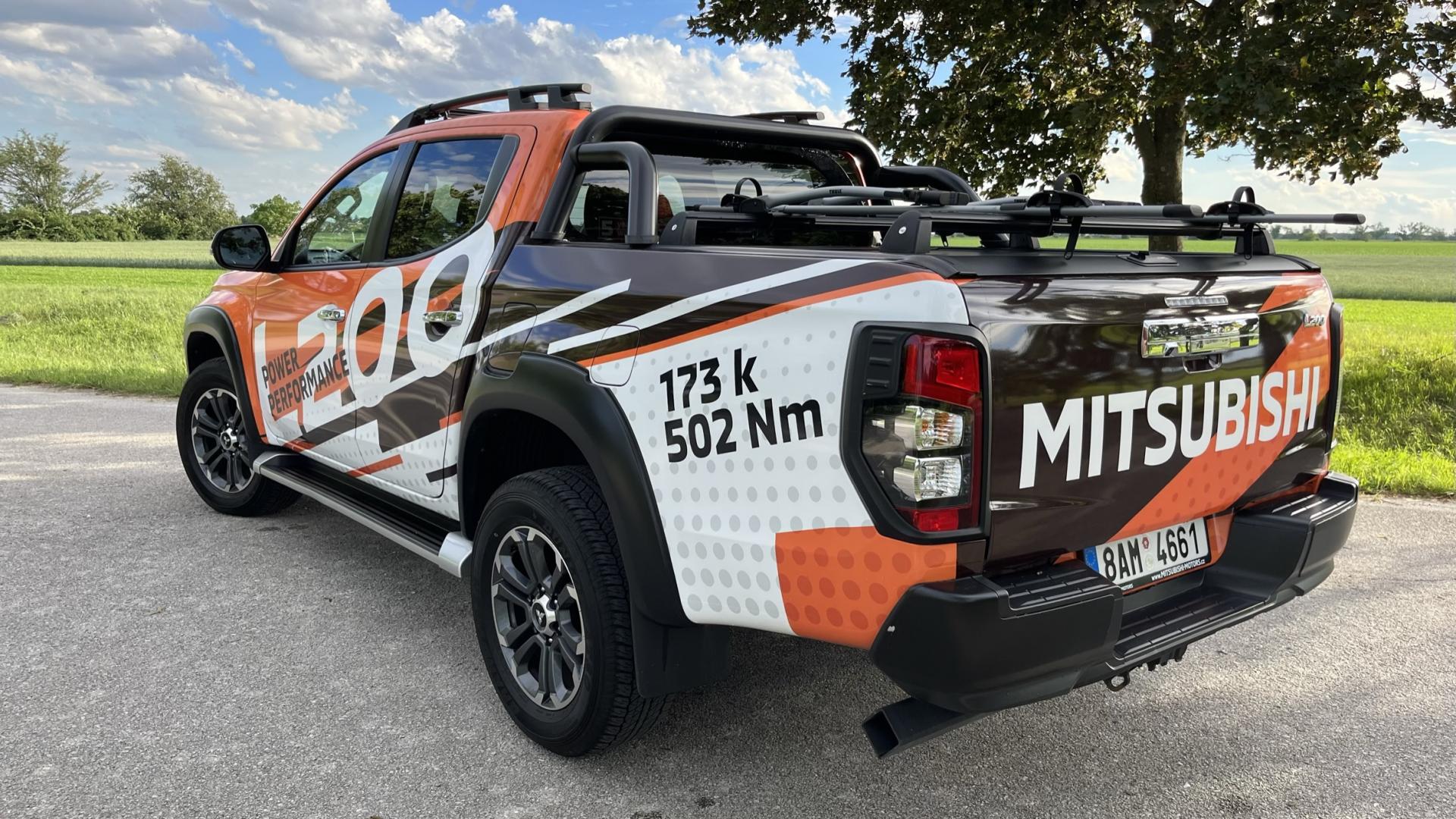 We have already tested the L200 in its new guise a few times, but this time the Czech representative of the brand went in a completely new direction. With the new “special”, they mainly focused on behavior on the road, on everyday use, on style and most importantly – on emotions. They took a classic L200 in the top Instyle trim, added a bold sticker in bright orange with stickers that scream “performance!” from every corner of the body and threw in some accessories, such as a rear frame, an LED ramp on the roof or a bed cover, or racks. 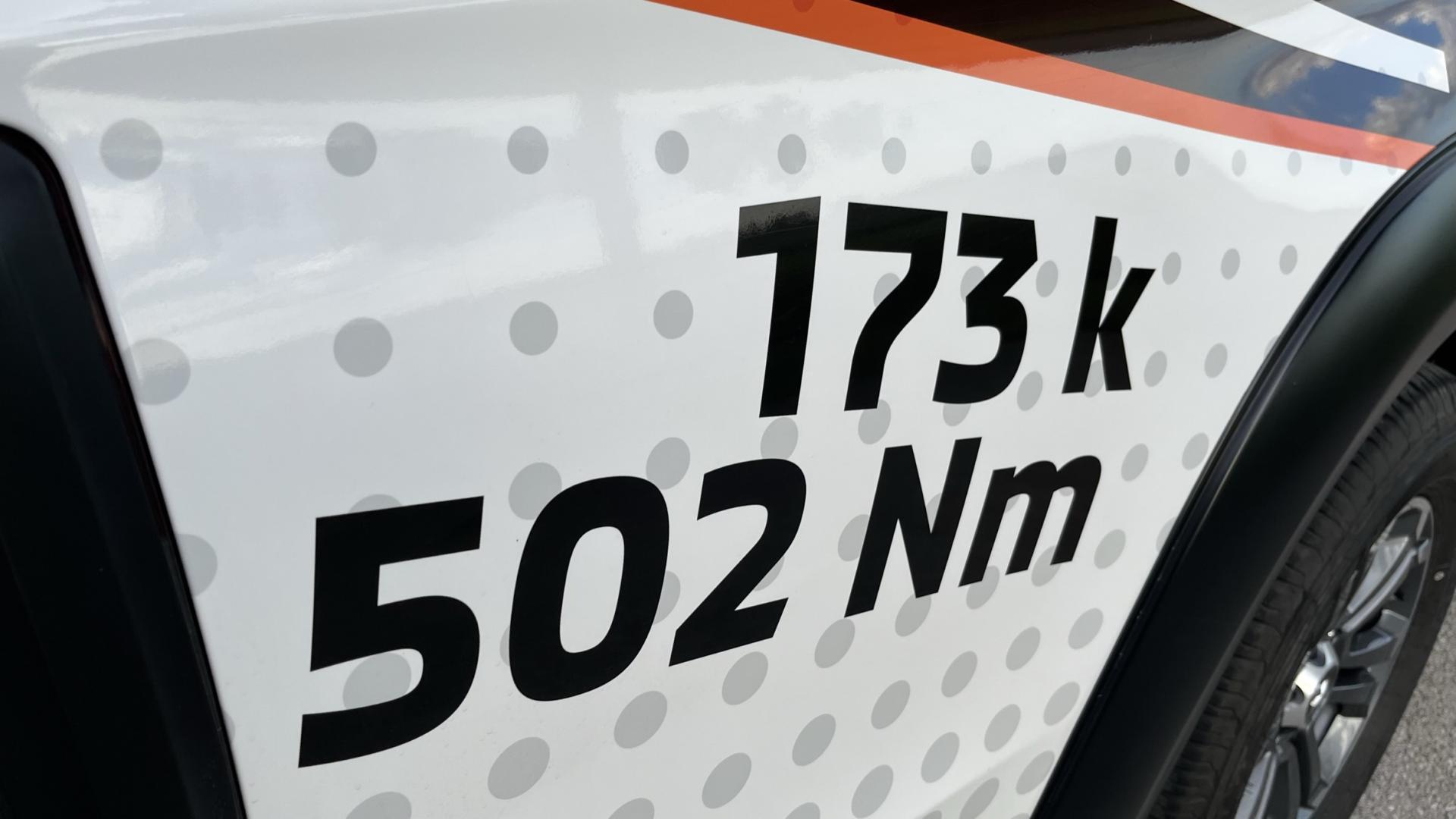 These additions and more or less only cosmetic changes are complemented by something much more interesting than some stickers. The designation Plus reveals the presence of a more powerful version of the 2.2-liter diesel four-cylinder, even though it is actually the only engine on offer. Higher performance is achieved here in an (un)traditional way – so-called “chip tuning”.

The brand’s representation relies on a solution from an external company, specifically on the technology for adjusting engine parameters from the German company Steinbauer. It mainly includes the optimization of the fuel injection length. This is a patented technology for adjusting engine parameters while maintaining its reliability, directly tailored to the L200 model. There is an increase in power by up to 15% and torque by up to 25%. The L200ka with the Plus package thus achieves a power of 127 kW / 173 hp (at 3100/min) and the torque peaks at a respectable 502 Nm (at 1750-2250/min). 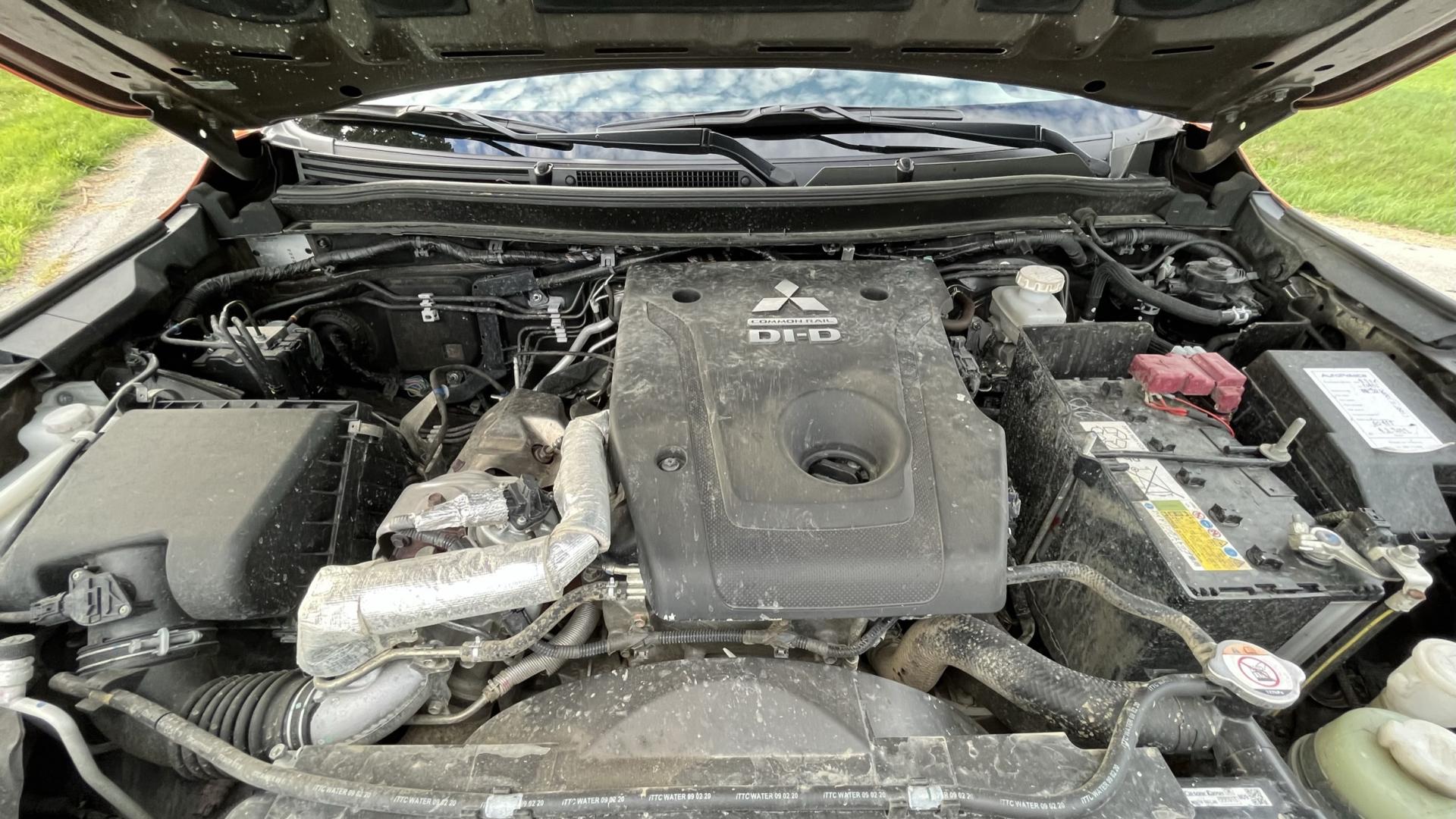 In addition, the car manufacturer wants less than €1,200 for this package, including VAT and assembly. And I must say that the L200 Power Performance runs quite briskly. Yes, we still have “only” 173 horsepower for a car weighing more than 2.1 tons, so we can’t expect miracles, but the more powerful L200 can accelerate really respectably, especially for such a heavy and large pick-up. The throttle response is very good and overtaking will not be a problem with such a big car.

In the test car, this more powerful engine was paired with an Aisin six-speed automatic transmission, but a classic six-speed manual is also available. However, even in the case of an automatic transmission, the car is sufficiently agile, and in addition, the classic automatic with a hydrodynamic torque converter shifts smoothly. However, it could make more use of the increased engine torque and not downshift unnecessarily. This turbodiesel really has enough power for everyday use. 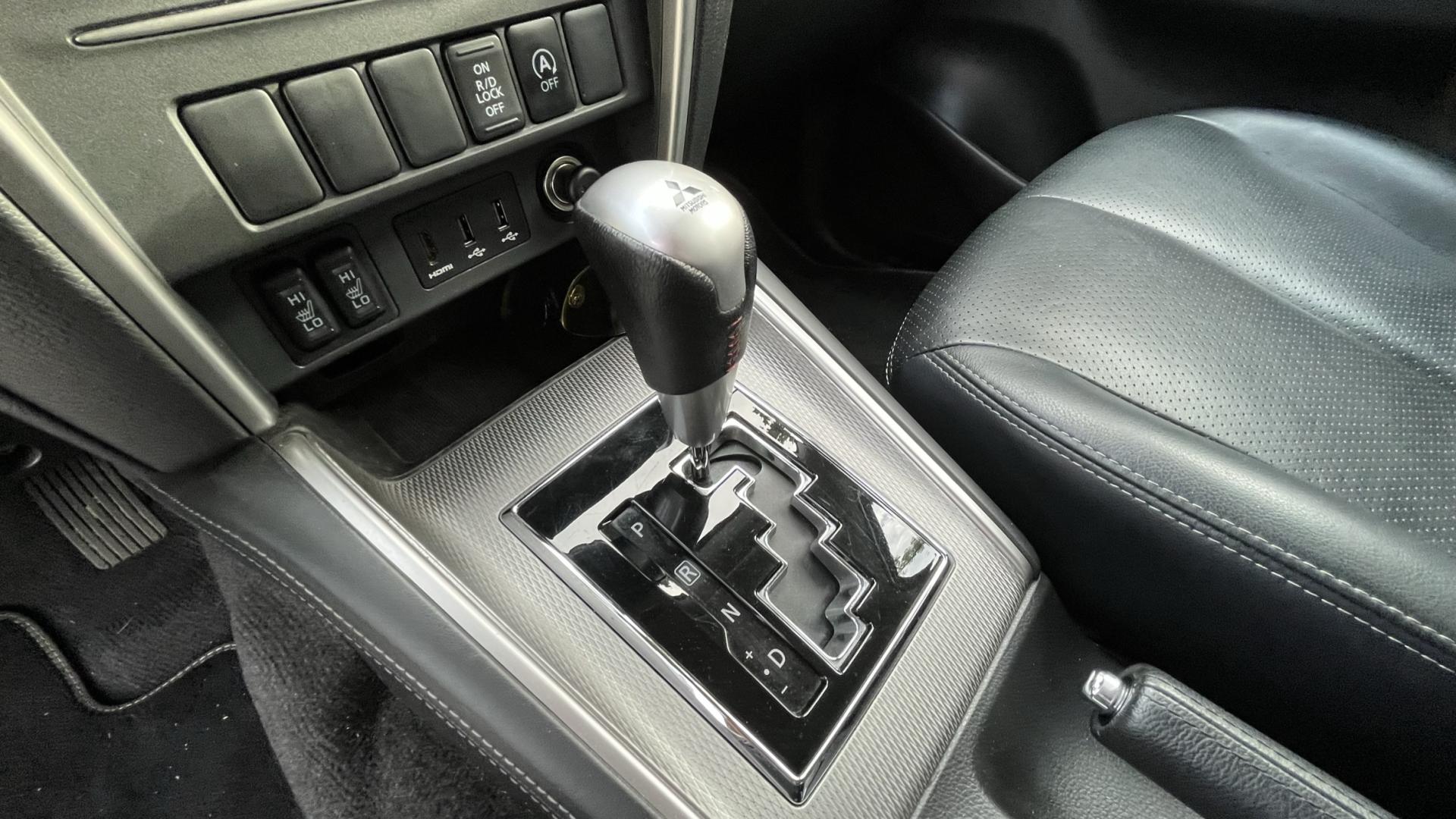 I still have to draw attention to one specialty of the tested piece. The Czech representative office of Mitsubishi equipped the latest “showcar” with additional sound, using a sound booster from Kufatec. However, unlike the recently tested SpaceStar, it fits quite well here. It is a system that consists of an external sound generator, which has its own control unit and which can cooperate with the vehicle’s control unit and thus react to starting, adding gas, current engine speed, etc. It looks and sounds interesting. A classic four-cylinder diesel “rumbles” in front, and the bubbling sounds of a classic American gasoline 8-cylinder pour from behind. You can also listen to it and it sounds quite faithful, while a layman can easily have the impression that it is a real engine sound. Until he walks over to the front hood… 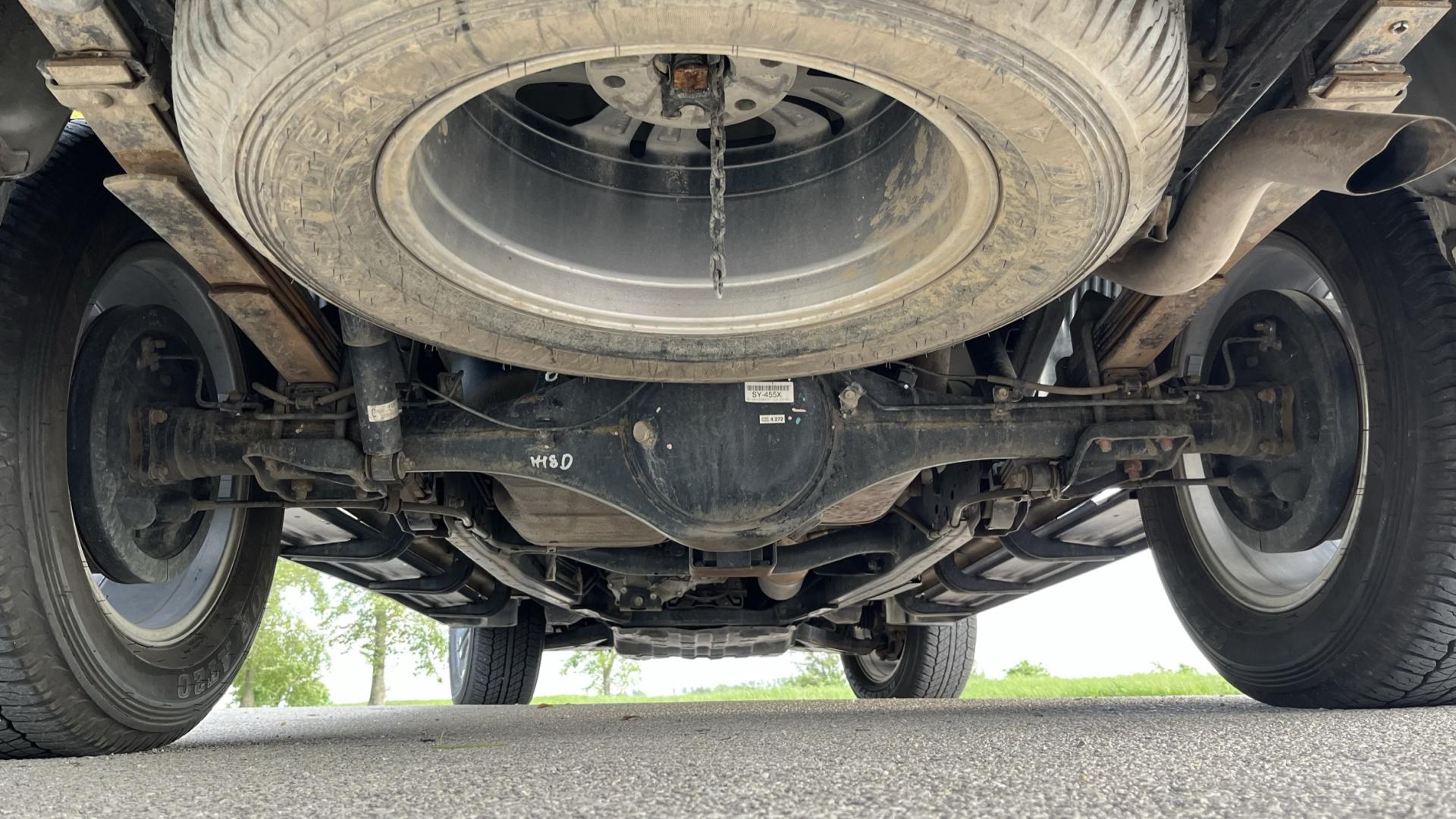 Fortunately, the diesel four-cylinder is decently sound-proofed and quite refined, so it doesn’t disturb much on board. The relatively quiet running of the engine nicely complements its increased dynamic potential, which allows the driver to drive the L200 at the same pace as a normal passenger car. And easily even faster when it comes in handy. On the German highway, it is not a problem to go over 170 km/h, and the car is completely stable, the engine does not bother or make excessive noise. Of course, the overall acoustic impression can be affected by the choice of tires, they will increase the noise in the terrain. As well as, for example, the installation of a snorkel or other accessories. Such an LED ramp on the roof is something that I would easily wish for with this installation focused on performance and speed. It creates enormous noise directly above the heads of the passengers.

Comfort also deserves praise, despite the fact that the L200ka stands on a ribbed frame and uses a rear axle with leaf springs. At Mitsubishi, during the recent modernization, they improved some important things, and the mentioned leaf springs have, for example, six instead of five leaves, the front axle received new springs and larger shock absorbers. Work was also done to increase the stiffness of the front parts, and the rear corners of the body were also strengthened. 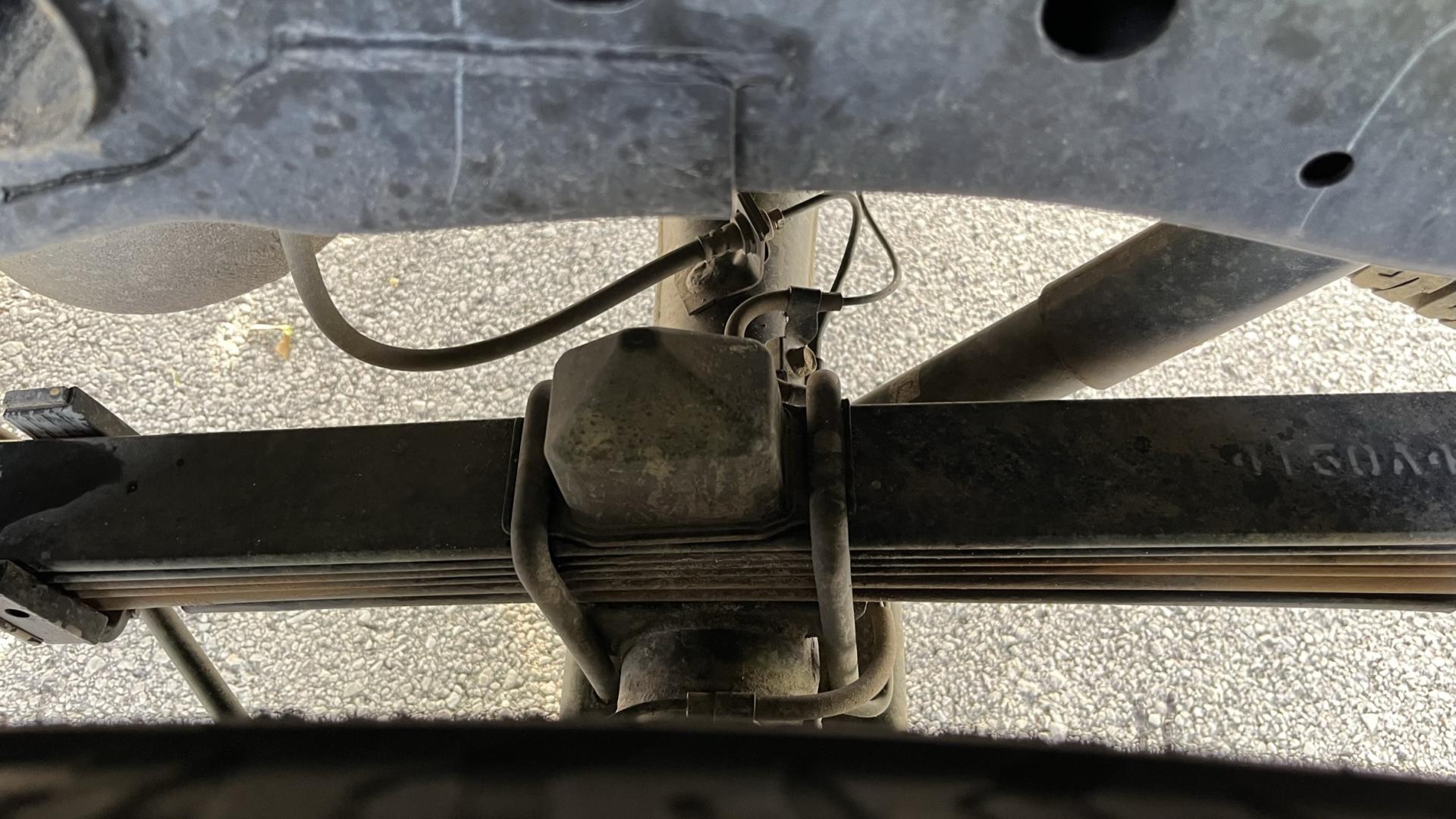 In the interior, even with the most expensive version of the Instyle, you can tell the “utility” origin, especially with the choice of materials and the design of the control elements, but the equipment itself is not bad at all. We have the aforementioned LED headlights, leather-upholstered seats, a leather multifunction steering wheel, a system of cameras that monitor the vehicle’s surroundings, several USB charging ports, heated front seats, a height- and lengthwise-adjustable steering wheel, automatic dual-zone climate control, cruise control or an audio system with a color touch screen, digital radio, Android Auto and Apple CarPlay support and six speakers. It’s more than decent for a pick-up truck…

Related post:  The plug-in hybrid Outlander will also be produced in Europe

The utility function was also not forgotten, so you have a car at your disposal that can transport up to a ton of cargo and tow up to a 3.1t braked trailer. The cargo space offers a width of 1470 millimeters and a length of 1520 millimeters. You will also appreciate decent off-road equipment when traveling off-road. In Instyle, the L200 relies mainly on the Super Select-II all-wheel drive system, which offers permanent all-wheel drive complete with a reduction gear, as well as the ability to lock the center differential. All L200 variants are equipped with a rear differential lock. 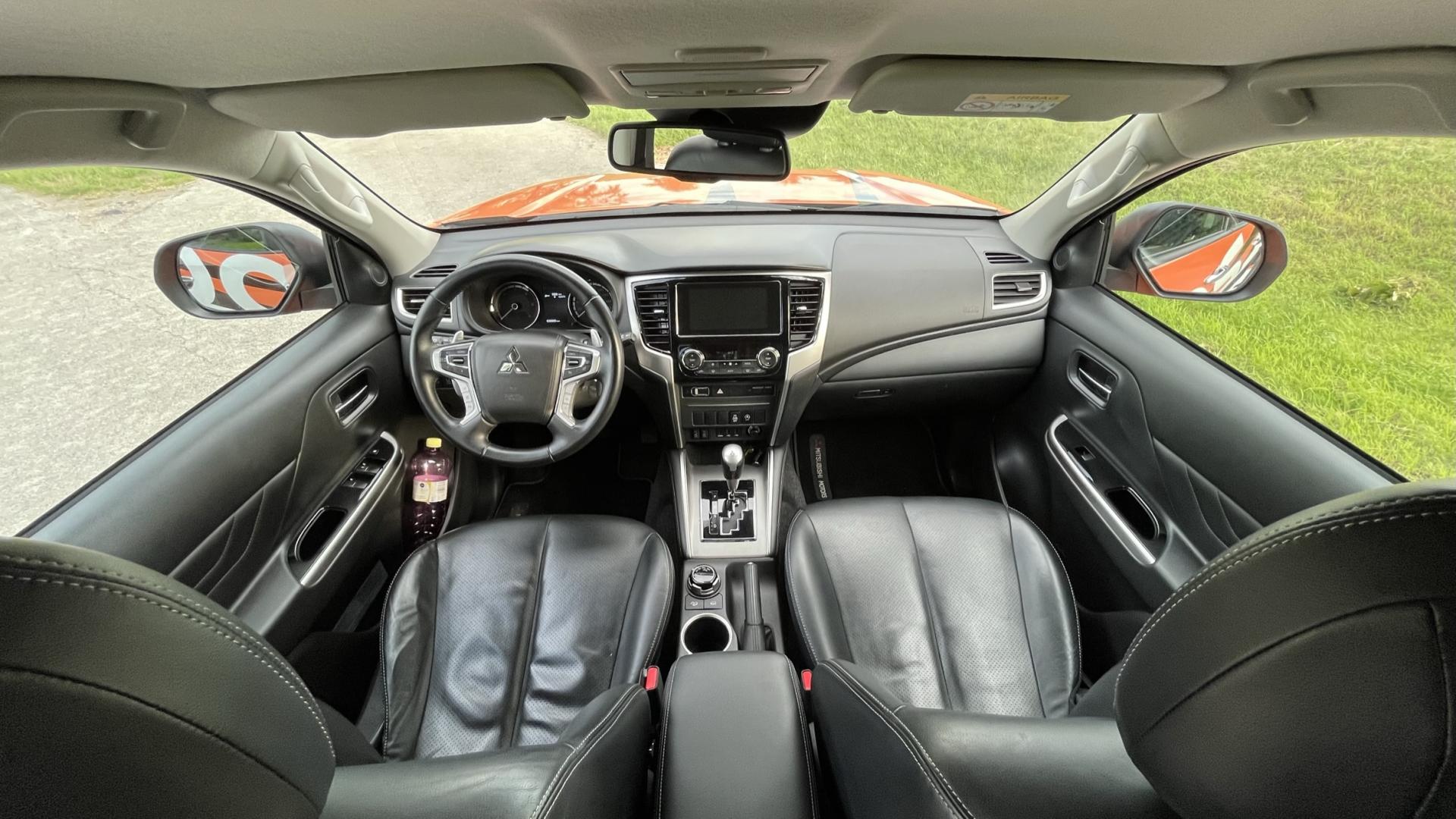 All this and the ground clearance of 235 millimeters, or the front approach angle of 30°, the rear approach angle of 22° and the passing angle of 24°, make the L200 offroad . With all this, you will also appreciate the already mentioned simple but robust chassis, thanks to which you practically do not have to decide what you are going for. 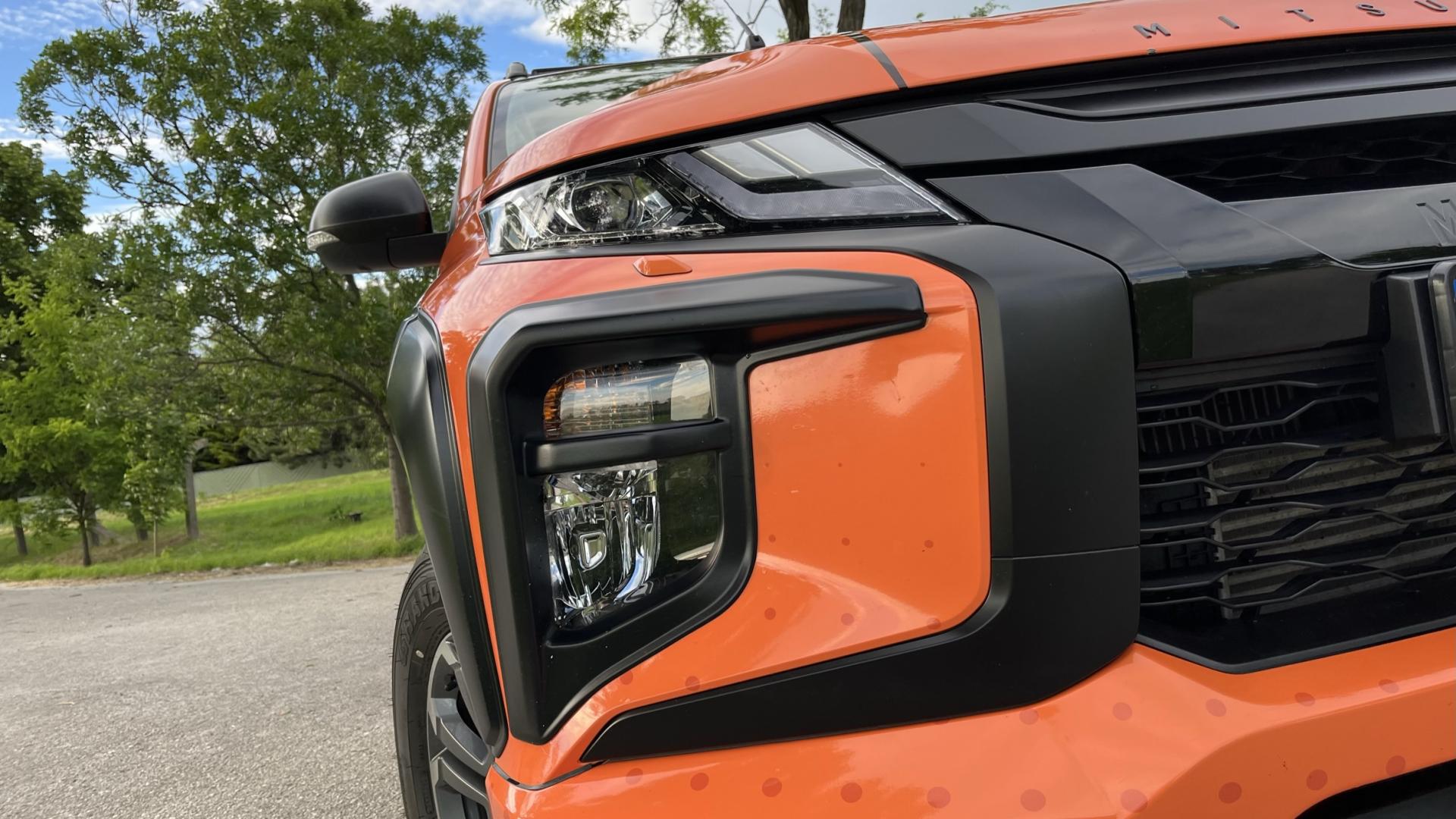 The week with the L200 Power Performance flew by and on the way back I reflected on how nice I had gotten to be with it and how I would love to park it in my hypothetical garage. Although there are some imperfect details, e.g. that there is no storage space under the rear bench and the system for opening the covers of the diesel and AdBlue tank necks is a bit comical, so this fast PickUp for every day is a very versatile machine for solving everyday transport requirements, easily for the whole family.

And all that’s left is the price. The Mitsubishi L200 in the four-door Double Cab version costs at least €33,990, and the tested Plus version with a more powerful engine, automatic transmission and the best Instyle equipment starts easily at over €44,000… of course, you will pay extra for various packages and accessories separately. I’m going to throw in the piggy bank, let me fill that imaginary garage sometime… 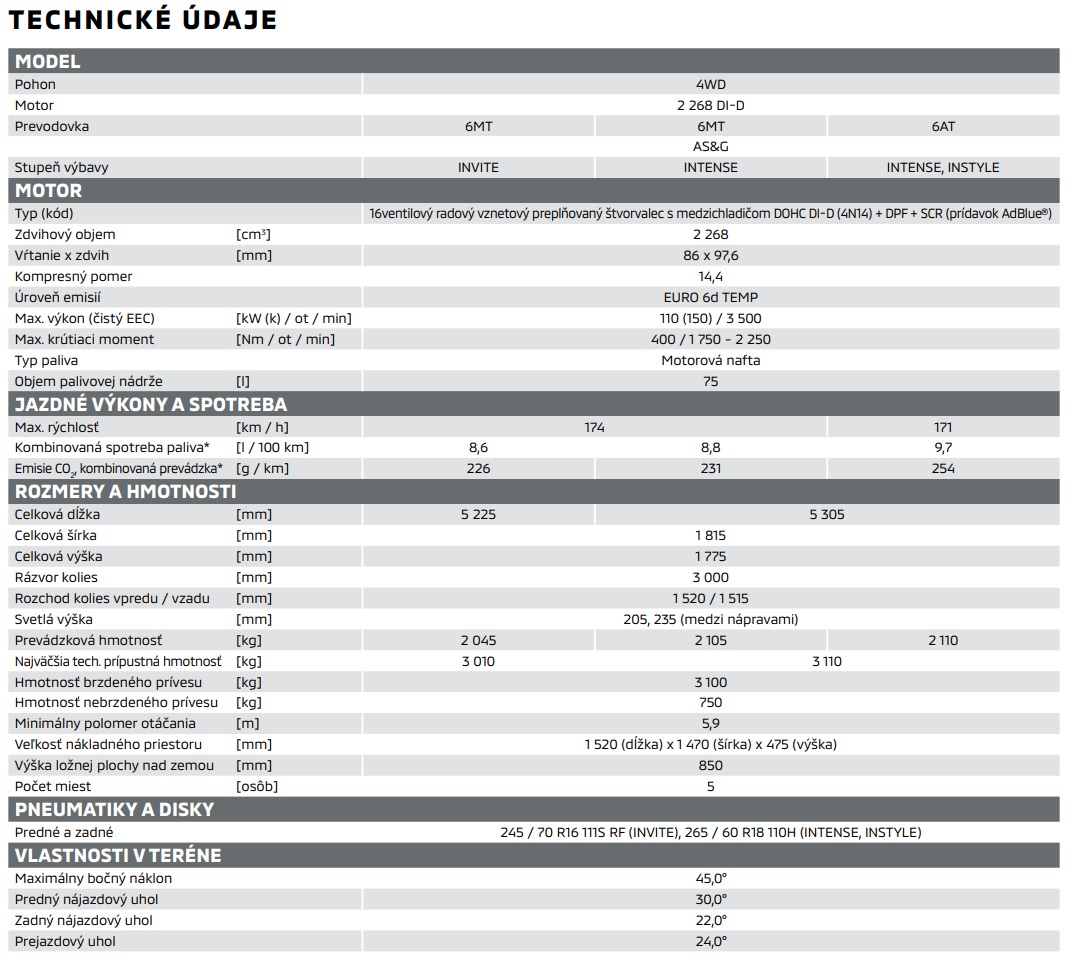 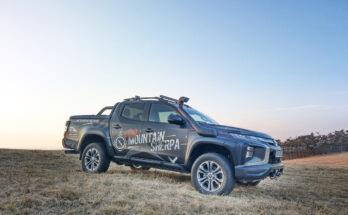 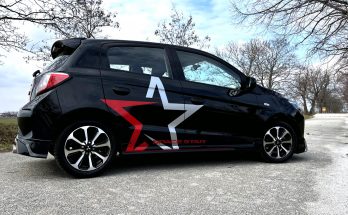 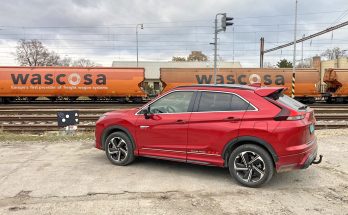