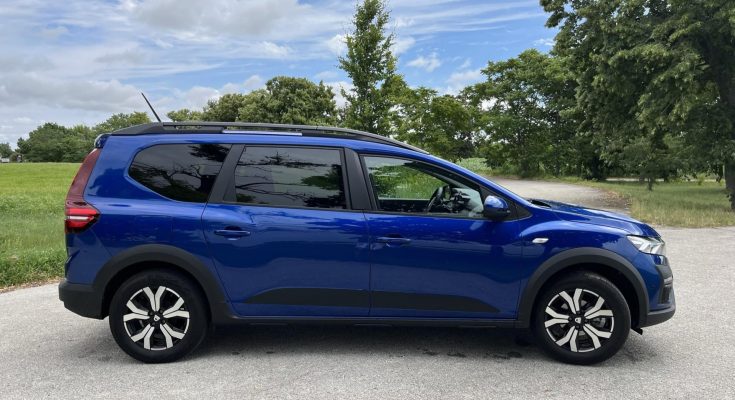 Already from the first presentation photos and videos of the new Dacia Jogger, it was clear that this car has a huge potential to fill a space in the market dominated by "useless city SUVs". Jogger is a bit of a station wagon, it has a pinch of MPV and a bit of crossover. On top of all that, it's also reasonably priced, so it's no wonder that the Jogger was one of the most anticipated cars of the year. Can it succeed in today's pampered world of cars even with its simplicity?! 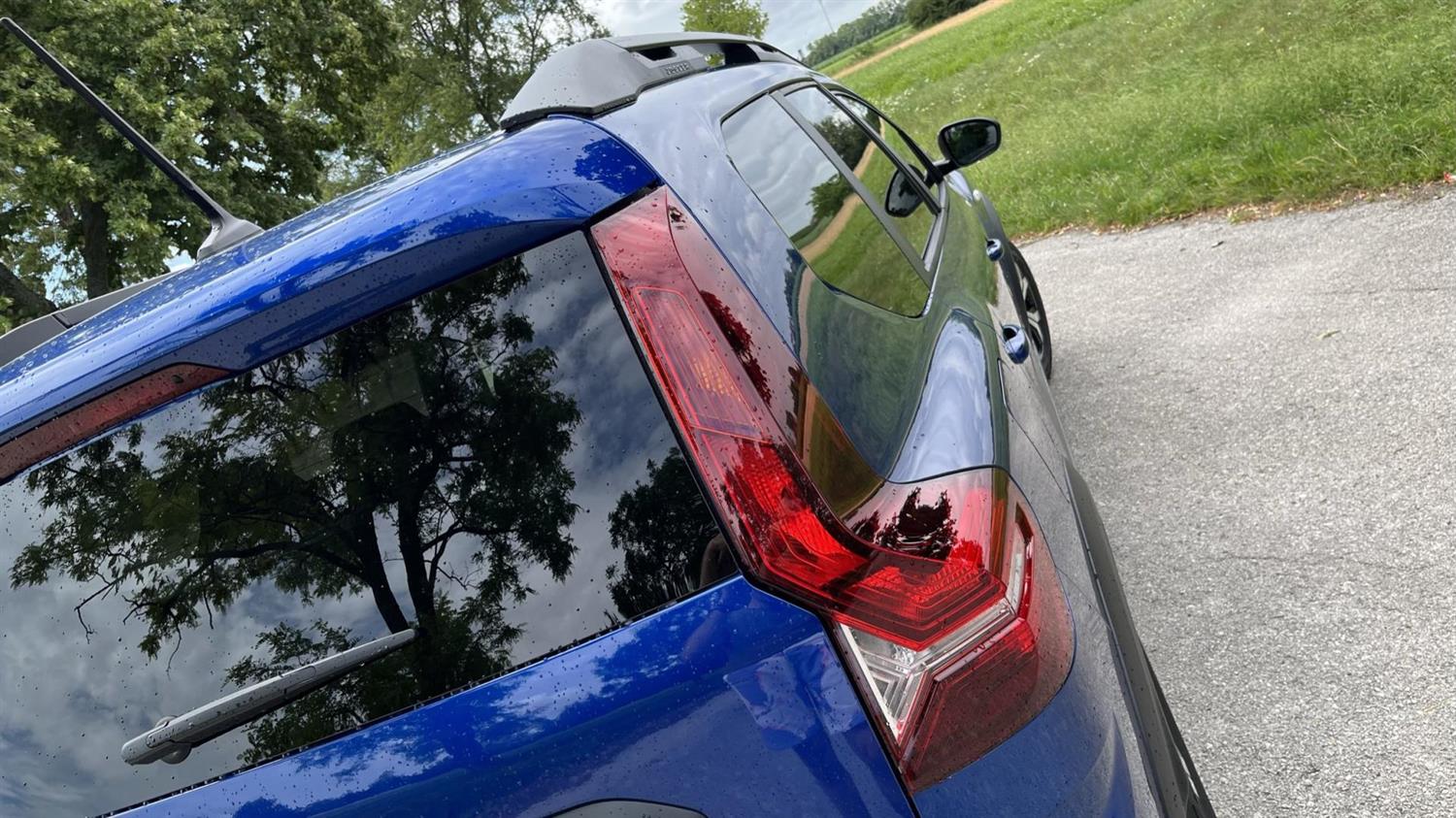 Let's go to the design first. The Jogger has the entire front part up to the B-pillar taken from the Sandero model (specifically from the Stepway version) . The lights with the mask are elegant and the segmented hood gives the car a bit of an SUV touch. The rear most of all resembles the first Volvo XC90, which has very similar shaped taillights. You can tell from the B-pillar that the designers were simply given the task of fitting a larger and more massive rear to the Sander's half, but it was done much, much more sensitively than, for example, Skoda used to do with the Roomster. We had a test version with the old Dacia logo, but all vehicles have already received a facelift and after the order for production will receive a new mask and logos.

In terms of design, today Dacia no longer offends and rather impresses. Whether you like the Jogger or not, one main impression is likely to be taken away by everyone: the Jogger is really big. This is enhanced by the ground clearance, which has a value of up to 20 cm and, above all, the wheelbase, a respectable almost 2.9 m. Above all, the last mentioned value is a promise of great spaciousness.

The interior, just like in the Sander, is full of hard plastics, but to be honest, in this price range, I don't mind it at all. The fact that designers had to choose primarily cheap materials is simply known everywhere. On the other hand, this is not at the expense of comfort, because such seats, for example, are simply great. Although they have softer seats, they support the back as they should, and even a longer journey on the highway was not a problem. 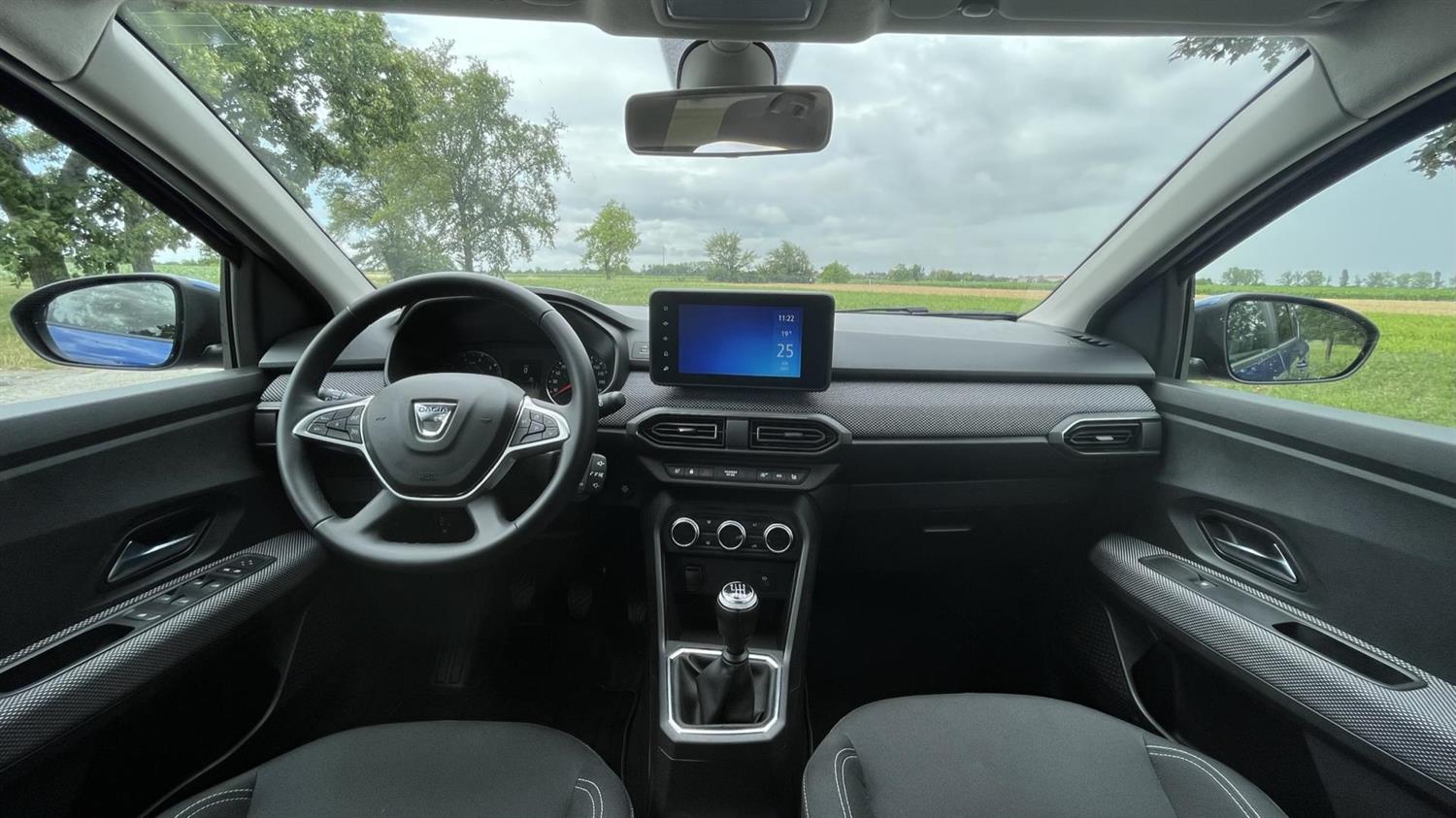 The position behind the wheel is very easy to find, and if you have ever sat in the mentioned Sander , you will immediately feel at home here. Anyone might criticize the austerity of the interior, but that depends on the point of view. The biggest design "flight" in the Jogger is the part of the dashboard covered with textile. This car is simply not aimed at those who need to prove something to their acquaintances and dazzle the crew with soft materials where no one would ever need them. 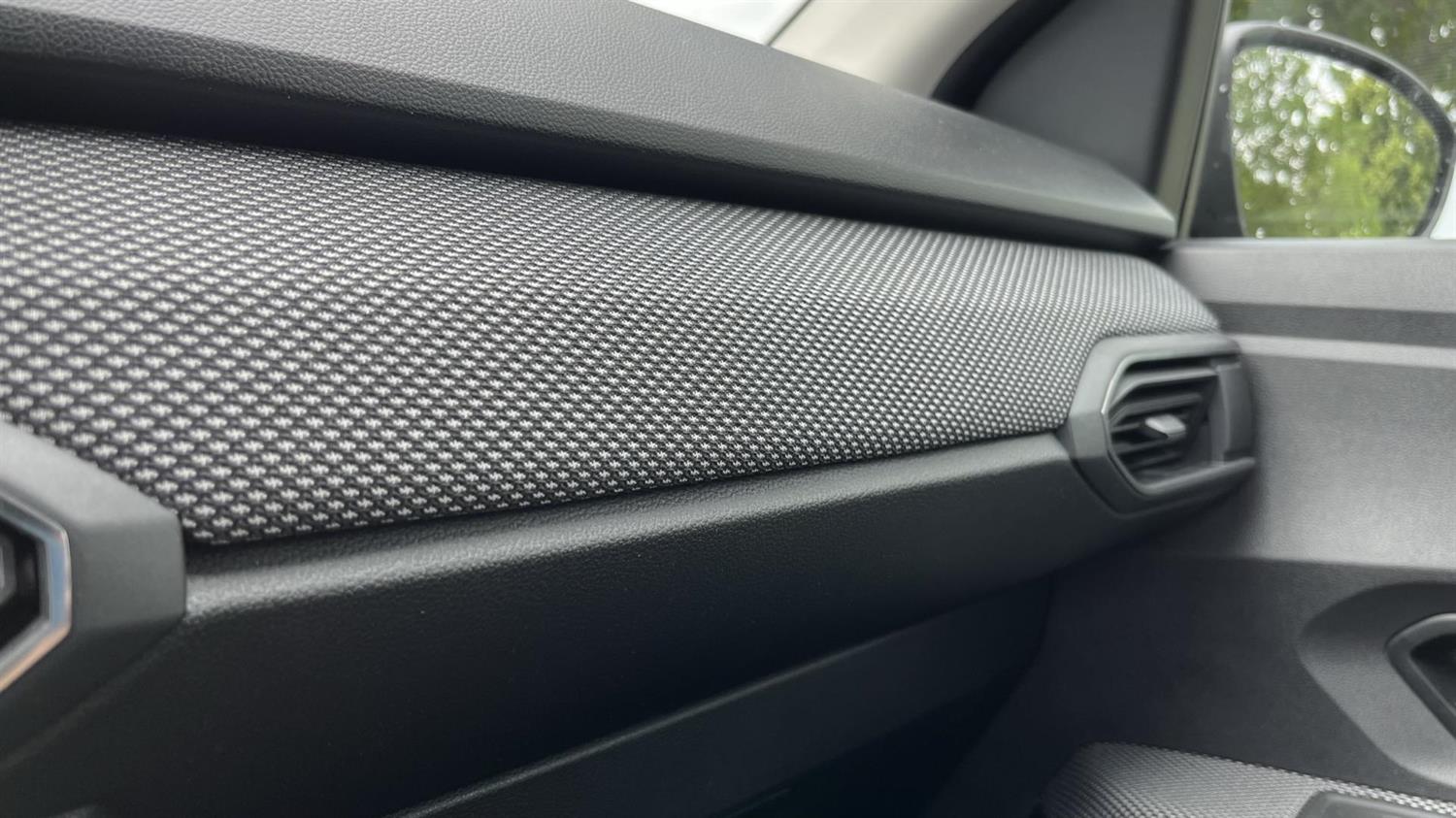 The task of infotainment is performed by a smaller 7" tablet, whose display capabilities I would rate as below average. However, high resolution and fast responses come at a cost, and it would unnecessarily raise the price for the end customer. But Apple CarPlay knows, even wirelessly! An audiophile probably won't find their way here, as the tiny and cheap speakers play very below average and are probably only intended to create the atmosphere during the conversation of the crew. 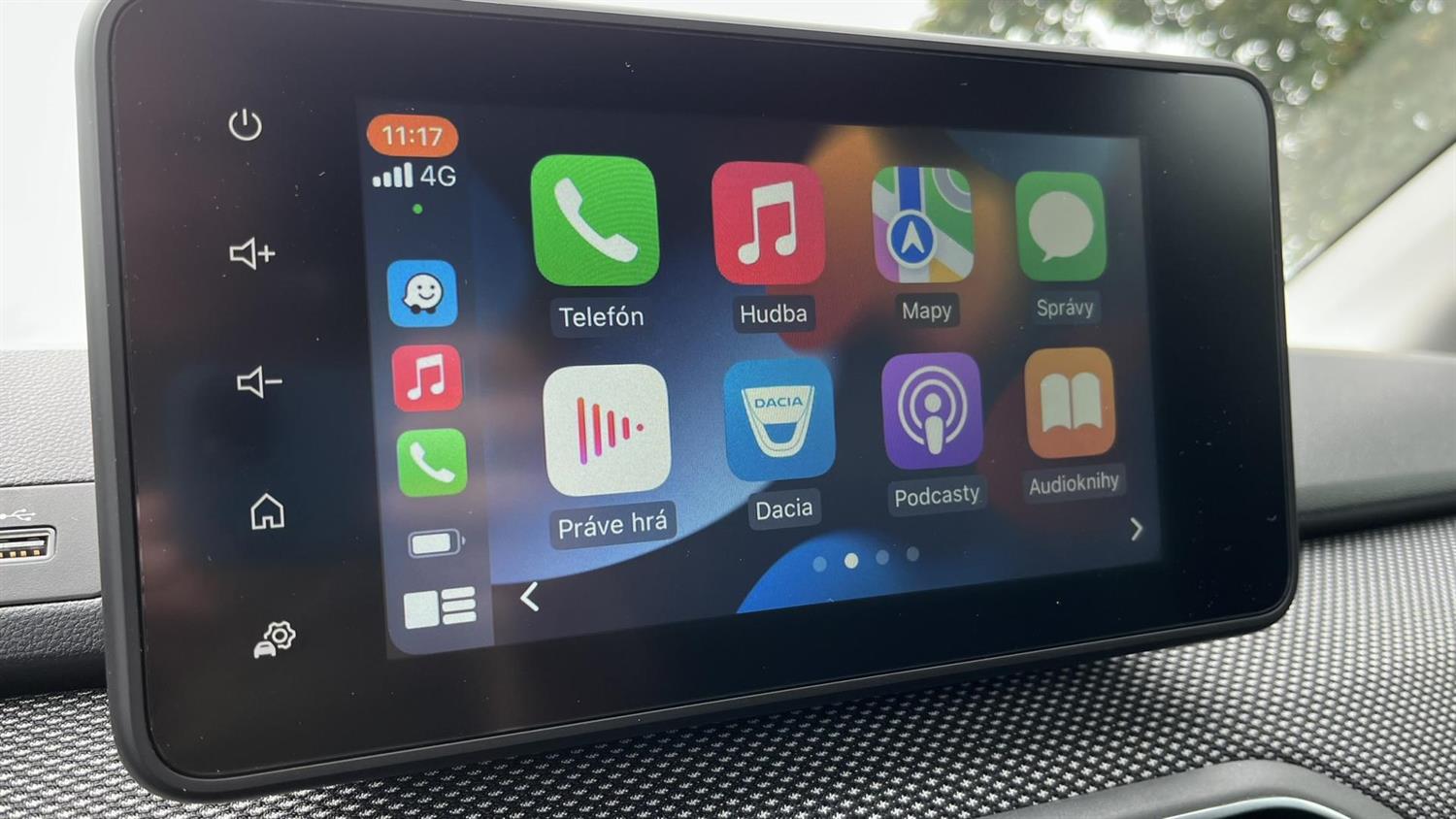 Considering the wheelbase, I expected a large portion of space in the second row. However, when I tried to sit up by myself, it wasn't so painful. The large wheelbase is somewhat unused in the tested five-seater version, or rather the trunk is highly preferred and there is a step behind the rear seats. So even possible rails and moving the second row are out of the question. Thanks to this, in the seven-seater variant, even the two sitting at the very back have enough space for their legs and headroom. 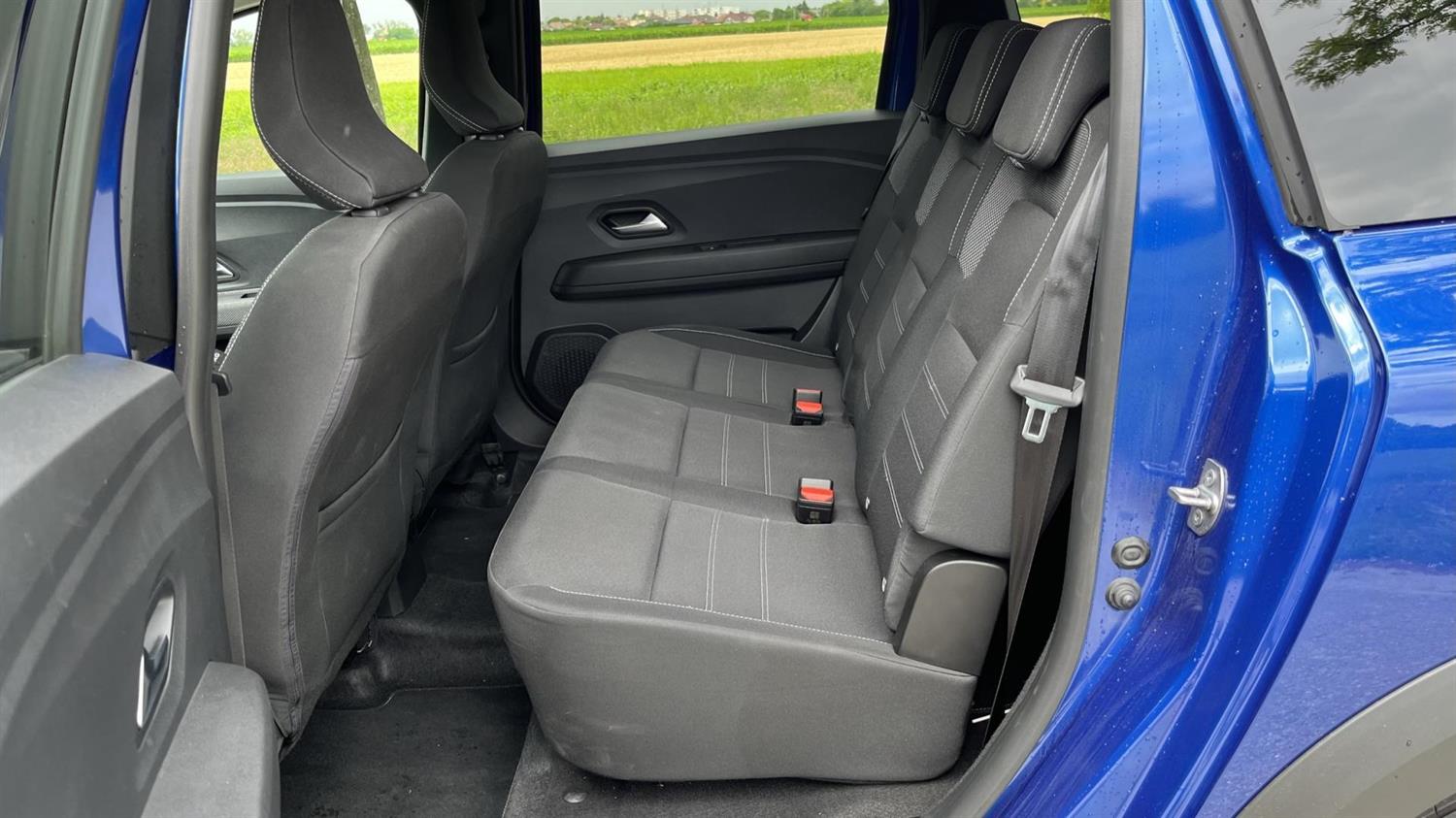 But the trunk! It will make every craftsman, cottager or active young family happy. It is really huge and the almost 830 liters can hold a lot. After folding down the second row of seats, it will not be a problem to transport bicycles without removing the wheels. So for active people who like to go out into nature and transport, for example, surfboards or paragliding supplies, it's perfect. However, the Jogger does not deny its origins in the Sander, as the inner width of the trunk is roughly a meter at its narrowest point. In addition to plenty of storage space, you can use the luggage compartment with a volume of up to 1,819L when the rear seats are folded down. 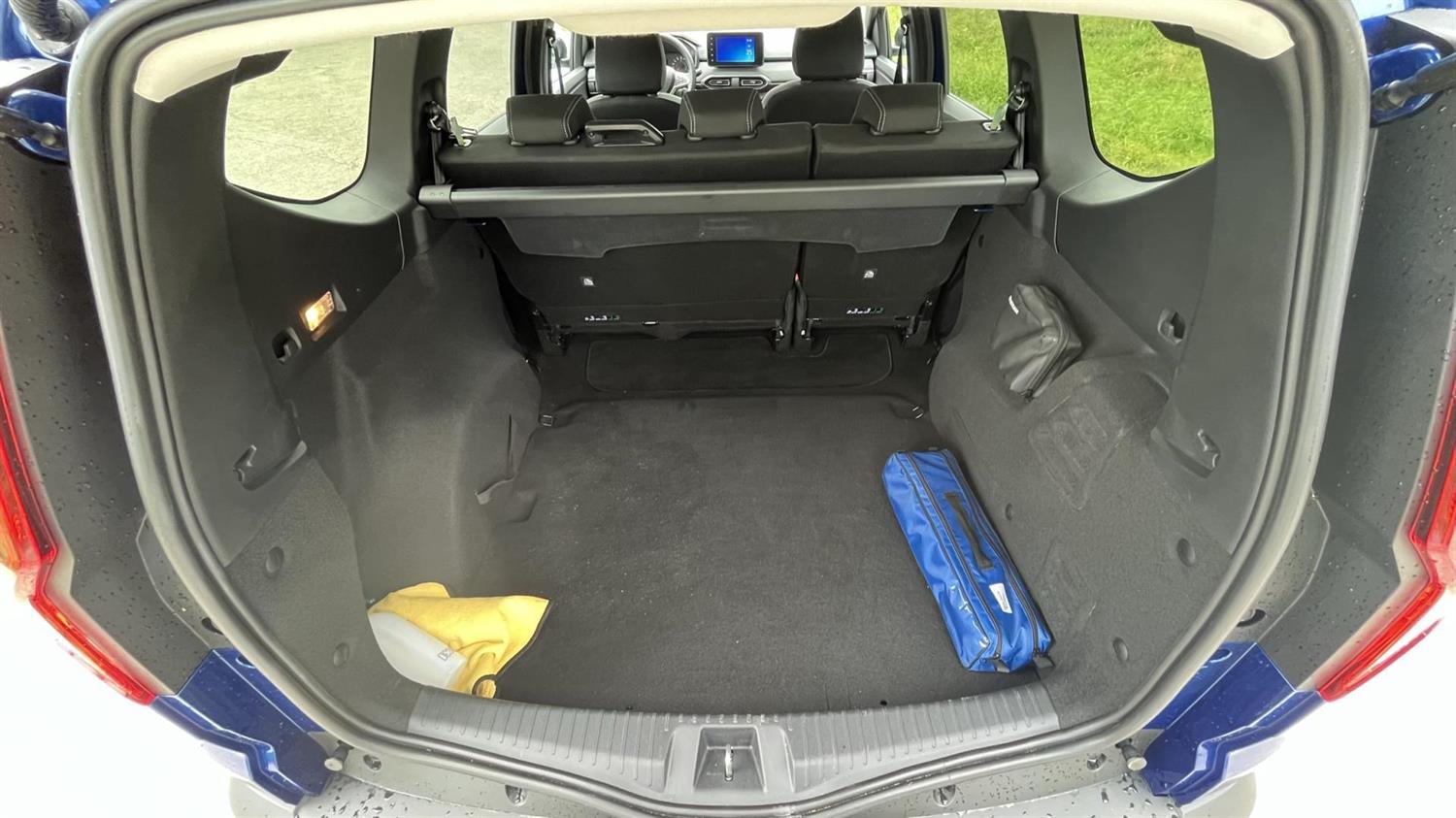 The Jogger also has a gadget from the Sander, and when a strange allen key falls out of the box, know that it belongs to the roof skids that have two positions. The basis is that they are longitudinal and the second position is the transverse position. You simply need to "click off" the caps, loosen the four screws, and with a little skill, you have something to attach the roof box or bicycles that no longer fit inside in a few minutes. A perfect solution and again money saved for additional crossbars… 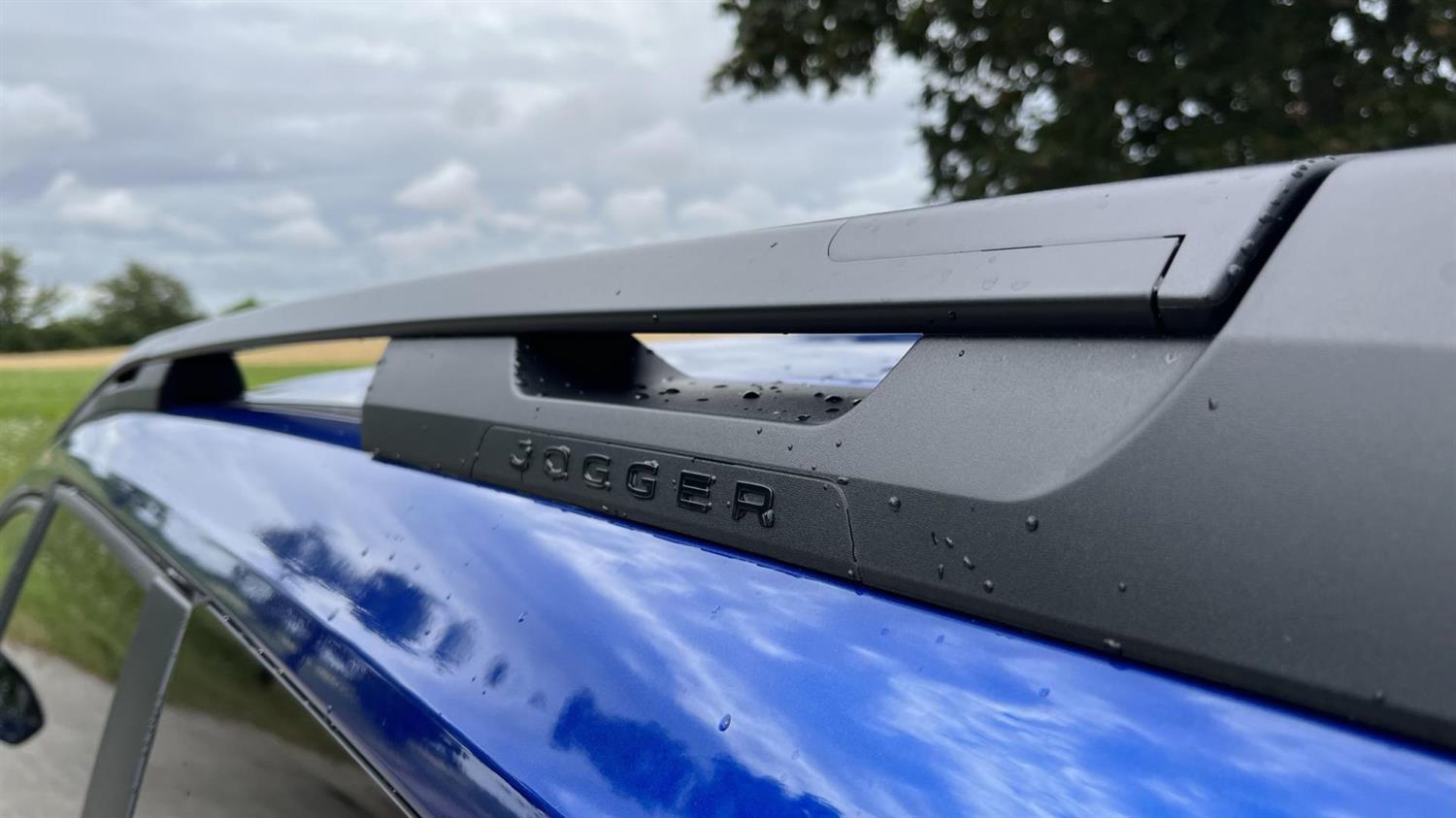 Under the hood I had an engine marked TCe 100 LPG. Timing is chain, injection is indirect, no DPF, no complex turbo. Burning LPG has been a tried-and-tested thing with this engine for years. However, there is one peculiarity. When burning gas, the car has higher power and torque, thanks to the fact that LPG, as a fuel, has a higher octane number. The difference in performance between gasoline and LPH is 67 and 74 kW, and it is quite noticeable, for example, on the highway. Of course, the torque is also different (160 vs. 170 Nm). The power difference, together with the price of gasoline, is also the reason why the buyer will prefer this engine and run on LPG, which can hold 40 liters in the tank. The more powerful TCe 110 is already a more complicated engine and the 10 horsepower is not worth it. Jogger won't get lost on the go with this either. I was actually very pleasantly surprised that even in such a large car, this three-cylinder dominates and pulls even above the highway limits. Even when occupied by 5 people with luggage, he doesn't run out of breath and I don't really know what to criticize him for… 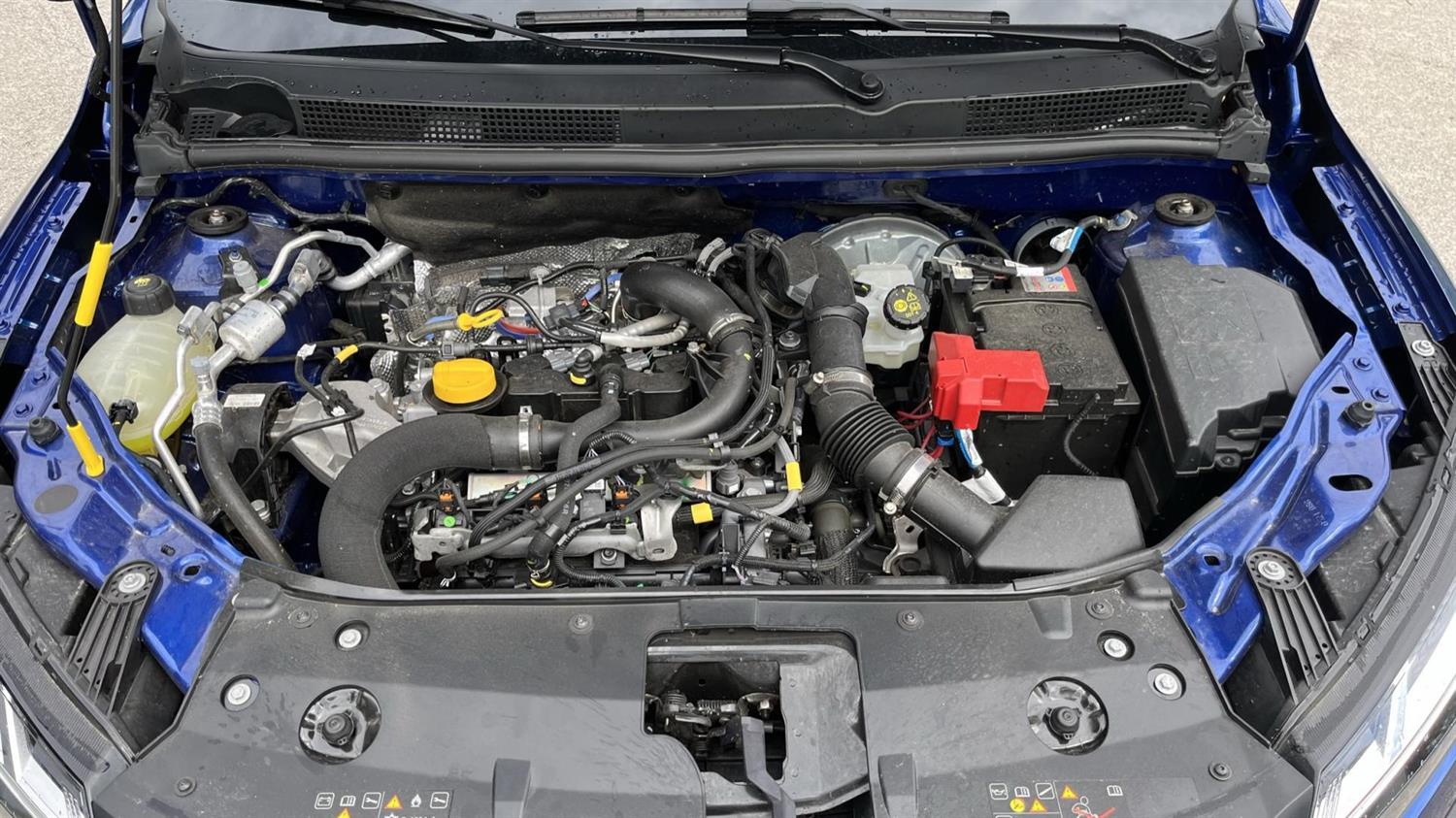 And even the consumption is not the worst. With the gas consumption, by the way, in the districts I got below the standard consumption to the level of 6.8L/100km. However, during normal driving, I was around 8.5-10L/100km. It was about a liter less for gasoline. Of course, the on-board computer showed higher values on the highway, where it was sometimes necessary to downshift during the long climb in order to be able to maintain the set pace. The performance of the aggregate is also different, because whenever I switched to gasoline, there were noticeably higher vibrations and a louder engine performance. LPG is better for him and it is probably clear that fuel costs will also be diametrically different in these times. 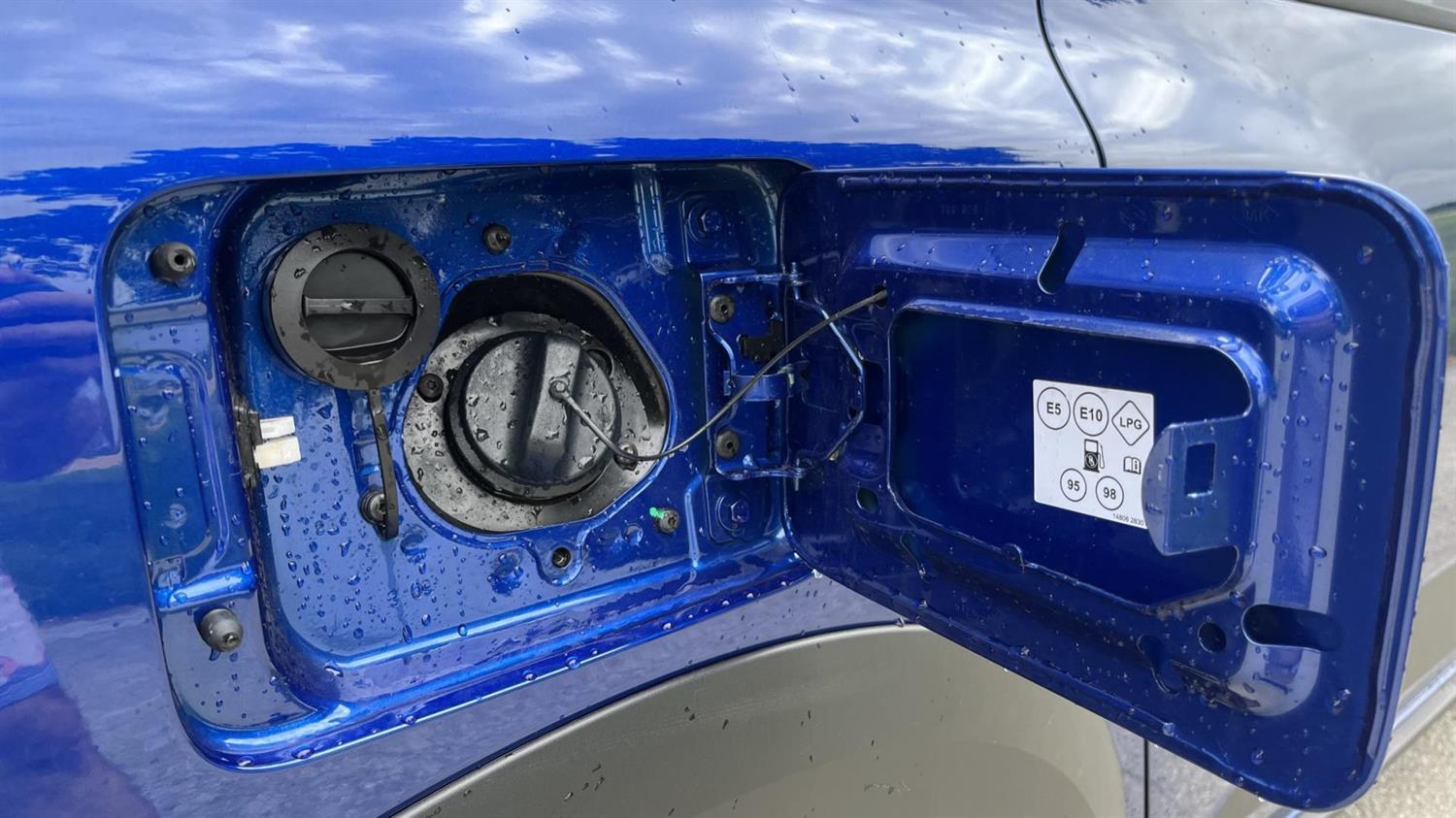 The new Sandero already convinced me that they know how to tune the chassis in Dacia, and the Jogger is no different. The main word here is comfort, and driving on roads of poor quality is expected – in other words, Slovak roads. Bumps and potholes filter the dampers brilliantly, although I must also note that in sharper driving with the car unloaded, the rear wheels tend to bounce a bit on bumps in corners. However, during normal driving, I enjoyed the gentle swaying and, apart from the poorer sound insulation, I can't fault the chassis at all. The seven-seater version has the rear shock absorbers and the suspension tuned differently, there the expression is a little stiffer. 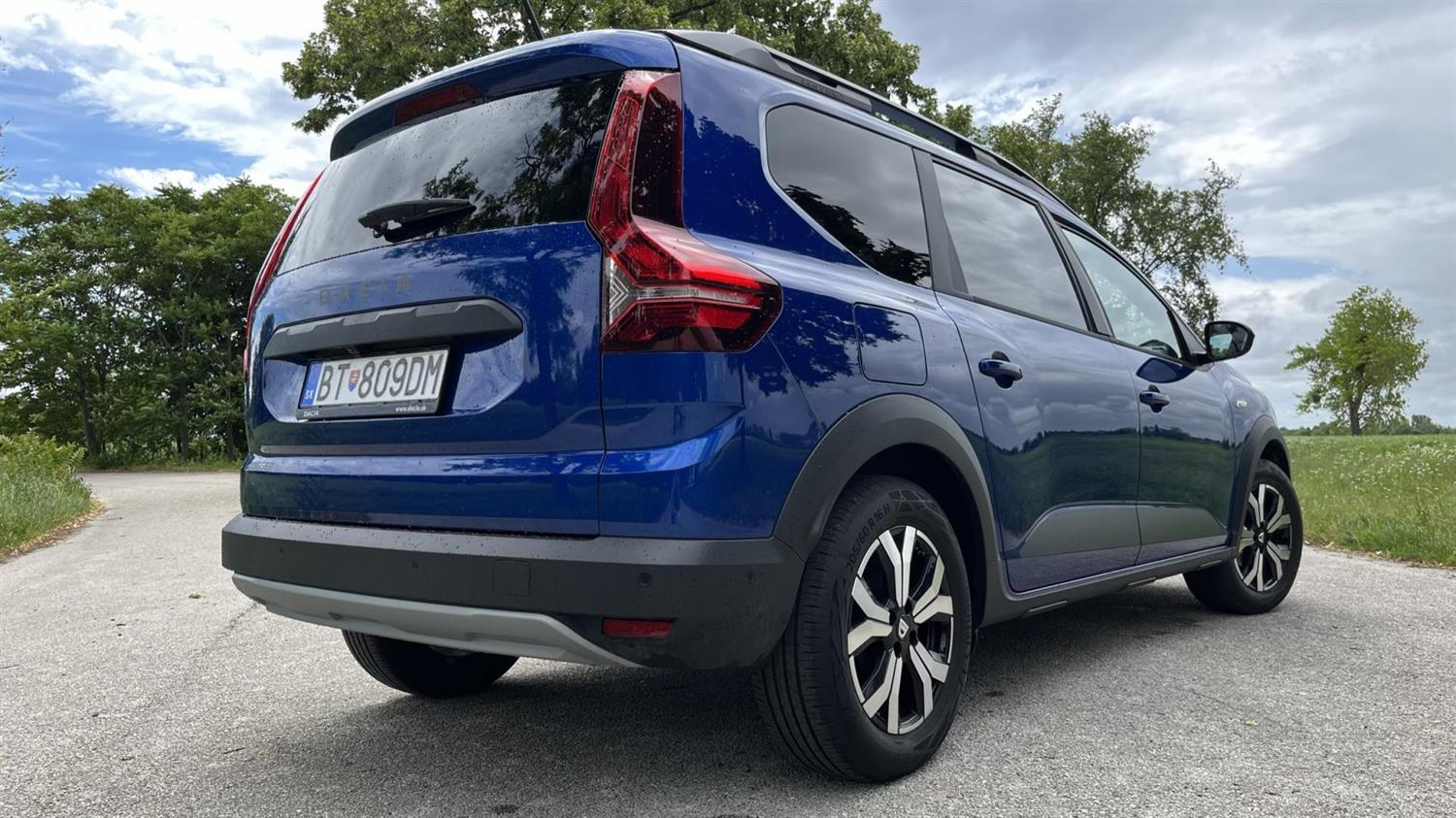 If you are currently thinking about a new car and the Dacia Jogger has caught your eye, don't hesitate and at least take it for a ride. Yes, on the one hand, it is a cheap car and, especially in the interior, you can tell. On the other hand, the Jogger offers a huge luggage space and great economy of operation… if you go for the version that burns LPG in addition to gasoline. For prices that start at €15,650 for the LPG version and only €18,450 for the tested Expression version. So if you need a new car and you have a smaller budget set for various reasons, the Jogger is simply an offer that cannot be refused… 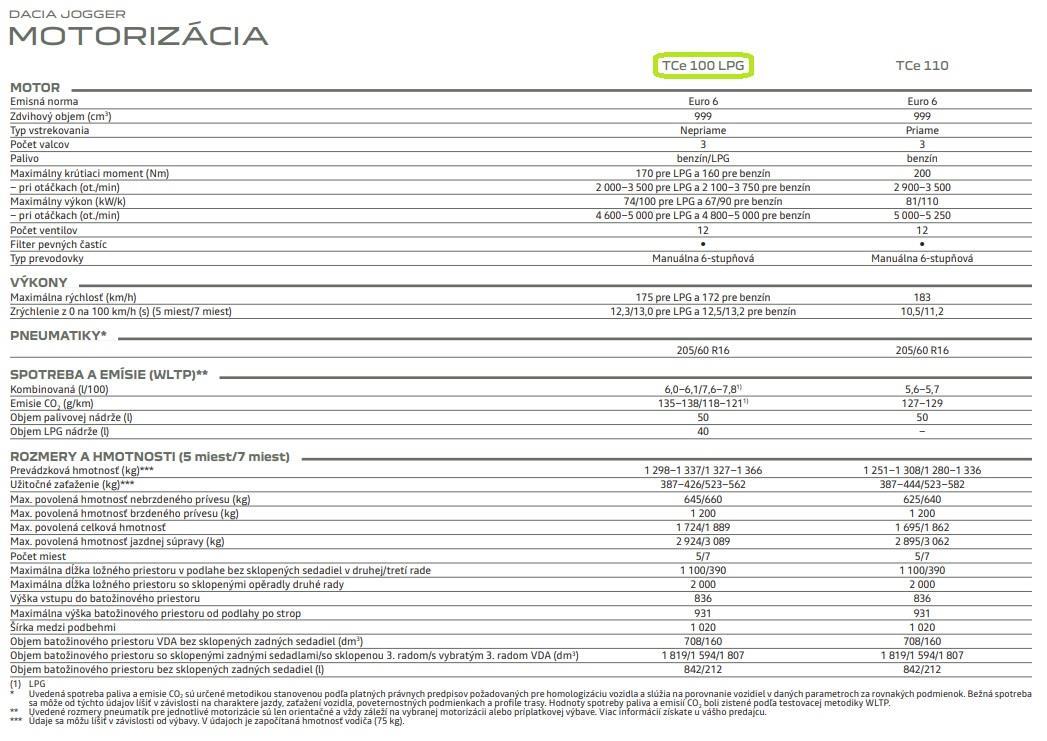 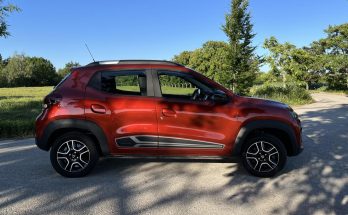 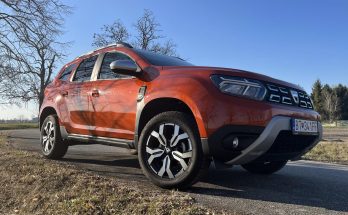 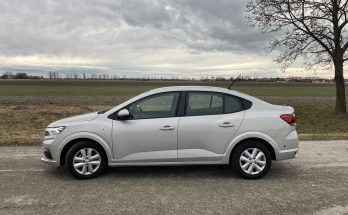